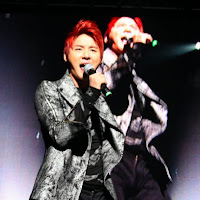 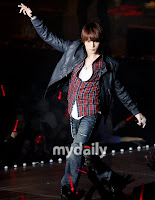 Missing a Once in a Lifetime Event
I woke up this morning still a little disappointed that I could not attend the JYJ Concert (Jaejoong, Yoochun, and Junsu) in New York (held at the Hammerstein Ballroom) last night, but sites such as APOP, DBSKnights.net and my favorite Facebook page (JYJ Junsu Jaejung Yuchun) have been kind enough to share their photos with me.
http://www.facebook.com/home.php?#!/pages/JYJ-Junsu-Jaejung-Yuchun/165689783455694
There were also some firsthand accounts about running into the fabulous three (JYJ) in elevators, on how gorgeous Jaejoong looked in person, and several compliments on Junsu’s new hair color and on Micky’s nipple and tattoo visible through his outfit (Yummy). Oh, hum, such is the life of a busy romance writer. Or should I say this is my life where I normally miss out on everything I want to do.


So how did I spend yesterday? Babysitting a precocious two-year old who was supposed to be sick, but who somehow managed to still tear up my house and demand that I get her things. Fortunately she’s recovered enough to go to the zoo today with her parents.
Later last night after finishing my NaNoWriMo work, (I’m up to almost 29,000 words) I tried watching the first episode of It Started with a Kiss 2 but the Internet started doing that dragging thing so I finally gave up around midnight and went to sleep.
What I did not miss was the two day train ride to and from New York, the traffic, and standing in line with 6000 screaming fans for hours. I don’t think I can do that anymore. I’m hoping more on the line of meeting them in a more private venue the next time they are in the United States, like back stage, in a quiet restaurant or in a jazz club in the French Quarters if they ever come to New Orleans. And I still have my back up plan to visit South Korea and hopefully spend a week getting to know them when we all have some free time and are not bombarded by our busy work schedules.
Though disappointed for not seeing my true love Micky in person, Jaejoong did give me something I’ll treasure forever…uploaded picture of Micky Yoochun in deep slumber, exhausted after performing in last night’s free concert. Thanks Jae.
Have a splendid time in the United States JYJ.


A Fan Forever, and AKTF (Always Keep the Faith)
Imari Jade
http://imarijade.com/
imarijade@yahoo.com
http://twitter.com/imarijade
Posted by Imari Jade at 7:55 AM