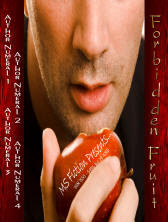 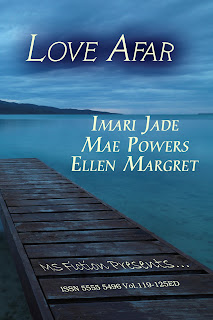 Fall in love all over again. There's no better way to celebrate the holiday than with a great romantic story.
http://www.midnightshowcase.com
Posted by Imari Jade at 5:00 AM No comments:

Having a Full Moon Day

Having a Full Moon Day

I think I got up four or five times last night. That is usually a sign that my tomorrow is going to suck. It was bad enough that I had to finally break down and take arthritis medicine for my left wrist because it refused to cooperate. It kicked in about four this morning, six hours after I took it.

I got out of the bed expecting to get some writing done this morning but my mother called and after a lengthy conversation at five in the morning I couldn’t get anything started, so I decided to read my email and order my grand-daughter’s birthday present so it can get there on time. She lives in another city and I don’t get to see her that often, but after I got the thing I wanted to purchase into the cart I couldn’t remember what address to send it to since her mother moves around more than any person that I know. So I left the stuff in the cart because I knew she was going to call me at work today. I had just enough time to sign on to MySpace when my ride called telling me she was ready to pick me up for work.

My body was in for a shock when I stepped outside and discovered that someone had stolen yesterday’s sun. I don’t do cold weather well and add the wind coming off the Mississippi and it felt like I was going to die from exposure. I managed to get to my office at work where the temperature there is 20 degrees colder than what it is outside, so you never know how to dress. A lot of people from the “Who Dat Nation” are in Florida enjoying the sun, and I’m in New Orleans wondering why the damn groundhog had to see his shadow. I don’t think I can do six more weeks of winter.

I quickly ate my raisin bagel and drunk my coffee before the phones started to ring. By nine o’clock I was wishing that I stayed home. I spend about seven hours on the phone trouble-shooting computer problems from clients all over the country. Some days are fine, but there are some days when I want to stick the phone into the shredder. This was one of those days. Every call irritated me to the point when I didn’t want to answer the next. I went outside in the blustery cold for a break. I took my tablet with me to see if I could get some writing done…no it was too darn cold.

I got the call I was expecting from my ex-daughter-in-law, well not exactly, she was calling to beg for money to pay for something or other. I swear, sometimes I think I have National Bank of whatever tattooed on my behind. Somehow I managed to get the address out of her and made no commitments to sending her money. Not once did she mention my grand-daughter so I wasn’t interested in why she needed the money.

At lunch time I went down to the cafeteria to get something to eat only to find a long line. So I went to the snack machine and got a honey bun and wolfed it down with a bottle of green-tea. Talk about a sugar rush. I have a bad stomach so there’s no way I should be eating junk like that. Normally I bring lunch, but like I said it was one of those days and I couldn’t find anything that I wanted to bring. I have to stay away from the frozen dinners because of the salt, salad greens don’t last nowadays and I end up throwing much of it away because it goes bad before you can eat all of it. So I went back to my desk and ate the honey bun while working, which is never a good idea…it causes heartburn, so I popped two Rolaids.

I kept hearing a beeping sound and finally put it together that it was my new cell phone. I’m not really a cell phone person. I got it last week and on Saturday I finally found out how to dial it. I placed one call and I still haven’t sat down to read the instructions so when it started beeping I tried to find a way to turn it off. It was beeping because the battery was low and of course the charger was at home, so the phone kept annoying everyone in the office. So I pulled the phone out and then the next thing I know an ATT&T operator started talking and then she goes on to tell me how much my monthly cell phone bill is going to be and I’m laughing because I don’t know what I touched to get her on the line and I sure as heck couldn’t figure out how to get her off. I managed to find the lock button after the phone disconnected and I put the phone in my purse to muffle the beep.

I’m planning to go to the Epicon Convention here in New Orleans in March but I can’t decide if I want to attend the entire conference or just a day of classes. Transportation is still a problem for me since I can’t drive and public transportation is limited on Saturdays and non-existence in my neighborhood on Sundays. I could probably book a hotel room for three nights but it doesn’t make sense to me to spend that kind of money when I live here.

So for the rest of the afternoon I’m still getting these calls from clients who don’t have a clue of what they are doing and then they want to argue with me when I give them advice on how to solve their problems. Of course I’m nice and friendly on the phone, but I’m cursing in my head. So by the time the workday is over I’m stressed out and mentally tired. I ended up eating Pringle crumbs and gummy worms when I started to get aggravated.

I was expecting to see my two grandchildren when I got into the house this evening. Usually I can barely get into the door before I’m baby-sitting. This is beginning to pose another problem because I can’t write and keep and eye on them so I end up not writing, which is not a good thing for a writer with deadlines. I’ve been home an hour and they haven’t burst through my day yet.

So what am I going to do this evening if I don’t have to baby-sit? Order my granddaughter’s birthday present and get started on the edits for my novelette that I received in my email today. I really would like to see the Grammy Awards that I taped on Sunday but unfortunately it is not more important than editing my book. Wait, I hear them coming in the house now and I hear their mother with them. “Yeah, I’m going to get some work done.” They brought me Wendy’s chili and French fries. Where is my Maalox?

PS – Dear fellow writers. I’m so thankful that I have my own blog because every now and then I get to write something.
Posted by Imari Jade at 4:47 PM No comments: