Hey yah’ll.
It’s been a little while since I had a chance to sit down and write a blog. I think it was sometime in May. One of the reasons is that I’ve been busy writing. The other reason is that I can’t find my MySpace blog. Everyone knows now that they have changed their format and layout. I haven’t been able to figure it out yet, but I think it has something to do with music. But I really don’t need it. I have a beautiful website and blog created by Rae Monet and its time I put it to use.

Since last we met I’ve had two books published with Sugar and Spice Press, “Love, Lies and Nosey Girlfriends,” and “Halo.”

Now is the time when I post a picture and a blurb and tell you a little about the story.  I got my inspiration for “Love, Lies and Nosey Girlfriends,” from my full-time job. I normally don’t combine my full-time business life with my writing life, but I have a couple of friends who are or were female Marines and I just thought I’d create a character and give a shout out for a group of individuals who are sometimes forgotten and who deserve to be recognized. 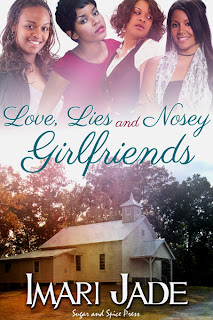 Four childhood friends travel back to Shreveport, Louisiana to attend the funeral of one of their closest friends. Her husband murdered her and then killed himself. No one seems to know why Earl King killed his wife Anna since the two seemed like the perfect loving couple. They dated since high school and had a thirteen year old son. Cecily, Regina, Beverly and Maureen get together and reminisce about growing up in the Southern town. Anna’s death bugs the hell out of Cecily James, a United States Marine and she won’t rest until she finds out what happened. She uncovers a story too incredible to believe. 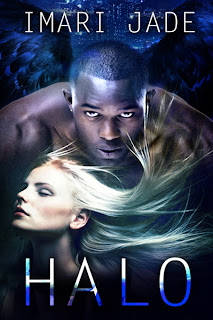 http://www.sugarnspicepress.com/index.php?main_page=product_info&cPath=7&products_id=219
“Halo,” was inspired by Beyonce’s song. It’s no surprise I like music and Beyonce is one of my favorite female singers.

Martial art instructor and neighborhood crime activist Eva Crawford witnesses the murder of the mayor of New Orleans. The murderer, Antonio Hornet, the son of a mafia boss gets a good look at Eva as he leaves the scene of the crime and puts a contract on her head to keep her from talking. When her adopted father and sensei Bisco Otori is killed during a hit on the dojo where they work, Eva has no other choice but go into the witness protection program ran by Michael Angelicus, a gorgeous blond-haired/blue-eyed detective who bears a striking resemblance to her. Michael assigns bodyguard Christian Ace to get Eva out of the country safely using any means necessary. Eva didn’t want a bodyguard, but she takes one look at the tall, muscular African-American and quickly changes her mind.

Christian Ace, the leader of a team of highly-trained operatives has dedicated his life to protecting the world from evil. He’s taken on assassins before, been decorated for bravery in her majesty’s British army and there’s no car or airplane he can’t handle. When asked by his boss to protect a key witness in a murder trial, Christian figures he can do this with his eyes closed. But less than an hour after meeting the sarcastic, trouble-making, beautiful blond Christian realizes he’s never come up against anyone quite like her.
Will Christian be able to get Eva safely out of the country before Antonio gets his hands on her? Or will the troublesome tempting little blonde be the death of both of them.

So let’s see what else has been going on.
Passion in Print has accepted my Christmas story “Silver Bells.”
Sugar and Spice has accepted Book 6 of my Asian Pretty Boy Series, “Distraction.” 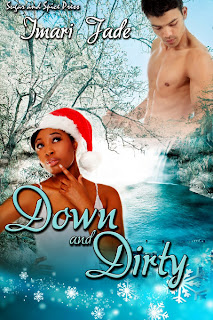 Yeah, I bet you thought it all ended with book 5, “Down and Dirty.” No. Distraction doesn’t really pick up where Down and Dirty ends. It’s a completely different stand alone book that I might think about venturing out and working a series around. But it involves a couple of characters introduced in Down and Dirty that I thought you might like reading about. I just saw the cover this afternoon and it’s fantastic.
I’m also working on Book 7. I have a name for it, but you know I won’t release it until the book is accepted by the publisher. What I will tell you is that the lives of Aomori, Shaundra, Distraction and the rest of the gang are about to take a turn (be it for the better or worse I haven’t figured out yet.) The characters are getting older now and are thinking about their futures.

At the moment I’m working on another multicultural interracial romance. On the weekend I got a new idea for a series. My muse was like, “Get out of Asia and write this series.” And I’m drooling over pictures of South Korean idols and wanting to knock the hell out of her. But I copied down the idea and hopefully I can breathe life in it for 2014.

Noble Publishing folded and gave me back the rights to “Strange Packaging.” Initially it wasn’t written to be a young adult book. I still don’t think it’s a young adult book just because I have young adults in it. If you can remember “In Deep Kimchi” didn’t have sex in it. Well, it did have one scene with Yori and Shaundra that bordered on the edge of sex, but it wasn’t until book two that I put in a love scene. That is the same idea I had for “Strange Packaging.” But I don’t know. I’ve already began book two in the series and no one is getting it on yet. So I’ll have to see where my muse takes me.

I challenged myself to write five Christmas books. So far I have completed two and have put the other three aside to work on the multicultural/interracial book I spoke about earlier. I’m 45,000 words into it and I need to get to 60,000. I’m hoping to finish it within the next two weeks and get it to the publisher.
My desk looks like a damn cyclone hit it again. I have steno books, binders and one subject tablets everywhere. I hope I live long enough to finish those books. But as soon as I tell myself that I’m not going to start on another book until I finish these, another premise jumps in my head. Sometimes it gets quite aggravating because I need to finish the ones I’ve started with and get them into the hands of publishers.
Wild Horses Press also folded this year and I have the rights back to “The Kiss of an Angel.”
I have the rights back to quite a few of my older books and I’m trying to find some kindly publisher who will accept them or I might self-publish them.
Well, I have to get back to writing. I have about an hour and a half left to get anything done before I have to get ready for bed.

Posted by Imari Jade at 6:03 PM No comments: